Many Thanks to the Soroptimist who participated in the Walk for Memories on January 31.  The highlight of the morning activities was 6 of us trying to cram into a 2ft x2ft photo box in the mall for a group picture.  Thanks Janet for funding the venture, too bad the pictures didn’t work out – we got Shirley’s hair and Jane’s shirt.  Marg and Judi how did you escape the picture with Mayor Fred? Anyway, we had lots of pics taken by SNAP for the March magazine. 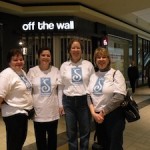 Off the Wall? Yes, maybe! 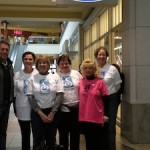 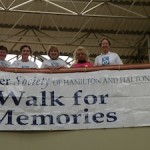 The Alzheimer Society raised over $32,000 today with the help of our club.  Thanks everyone for another fun adventure.

Has it affected you?

Alzheimer Disease and other Dementias touch millions of people in North America. It not only affects the person with the disease, but also their families and friends. I walk every year in Memory of my Mother, who had Alzheimer Disease for 25 years and my father, who developed Vascular Dementia from suffering several strokes and later developed a mild Alzheimer Dementia, which is also known as Mixed Dementia. Four of my mother’s siblings developed Alzheimer Disease in their early 60’s. My family and my cousins all know the increased risks involved for us, with having immediate family members diagnosed with Alzheimer Disease. I walk to alert the public to this Disease and the “Title Wave” of increased incidence of Dementias that will be diagnosed as the population in this county ages. After age 65, one of ever 11 persons will develop the disease. After age 85, one in every 3 persons will contract the disease. We still are not close to a cure. Contrary to popular believe, Alzheimer Disease is not just a disease of older persons. With heightened awareness of early detection, we are now seeing people diagnosed in their 40’s and 50’s! I walk to support the programs that are offered to caregivers, who desperately need the respite. I walk to raise awareness for the disease. I walk to get funding for more research. I walk to support those, who are living with this disease and to support their families. – Barb McCoy

Our Dad has dementia. After a debilitating stroke in June 2008, he has crawled back and continues to work hard. He no longer can walk or speak. Advanced dementia and Parkinson has made mobility and conversation is a thing of the past. Every month we see a further deterioration.  For the past six months, although he still recognizes our two boys, his grandsons, he now can’t remember their names. The little things become milestones and time very precious. – Judi Partridge

Dementia in the news:

The Virtual Dementia Tour, a hands-on tool aimed at educating professionals who spend their days working with seniors, helps employees to better understand what it is like to suffer from a form of dementia, including Alzheimer’s disease. Read more »

McMaster University will be a key partner in a $1-million research project to improve support for people living with dementia. Read more »