Opening Ceremonies began with an emotional role call of flags for all member countries. Cheers went up across the room as members were recognized for their country. At the end, the flag ceremony began with Canada, Quebec and Montreal amongst cheers and whoops. Past-President Margaret Lobo spoke elequently as she welcomed all the delegates and introduced our local guests: Mdm Jocelyn Ann Campbell, Montreal City Councillor and Christine St-Pierre, Minister for Culture & Communication and the Status of Women. She ended her greetings with a reminder that together we can make change happen.

After adjuring, members and guests filed up the escalator where they greeted by two Mounties (Royal Canadian Mounted Police) and a fiddler as they entered in to an evening of delectable finger foods and friendship. The decor of sails, a sugar shack, teepees, a old 50’s style deli counter, and snow touched evergreens set the scene of Canada’s diversity in culture and landscape. Samples of Montreal Smoked meat, maple sugar over ice, and smoked salmon were just a taste of what Canada has to offer, but no poutine was on the menu.

Beautiful costumes from India, Malaysia, French Guiana, Sweden, and Rwanda (just to name a few) showcased the variety of nationalities in attendance this year. Of course the ladies from Eastern and Western Canada Regions stood out in their red and white, adorned in glow sticks, cowboy hats and hockey jerseys. The shrieks of joy at seeing old acquaintances and plentiful hugs was a testament to friendships rekindled, as well as the satisfaction from committees conducted by email and phone committee finally meeting in person. 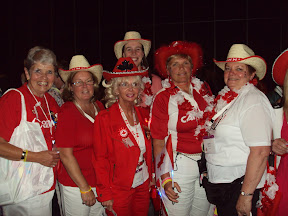 Caricature artists, typically found in the market square of the Viuex-Port, had attendees lined up to have their faces drawn, while those who gathered to watch laughed out loud and snapped photos of the final pictures. Each piece was a great souvenir and an authentic Montreal experience.

Overall, first time attendees felt welcomed, including several male travel companions, and the resounding sentiment was one of joy and anticipation of the days to come. One reunion of a Kenyan and Canadian, after not seeing each other since Glasgow, said she felt this evening was even warmer and friendlier – a wonderful first impression of Canada.

After a fun evening of fellowship, Brooke continued on with SI-Cambridge to tour Old Montreal on a buggy tour with Catriona, the horse: 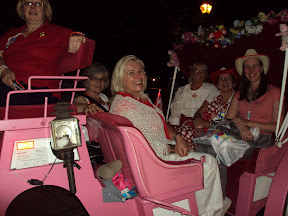 Posted in SI News.
Give the gift of membership