Congratulations Christine Aarlat on your successful car wash in aid of Flamborough Women’s Resource Centre!  Christine and her crew of faithful friends did the honours in washing while DAF’ers Brooke (along with x-DAF’er Councillor Judi Partridge) waved at and flagged down cars, while Sandy manned the donation bin.

Boston Pizza fed the volunteers again, KX94.7 stopped in to do a radio spot for us and they mentioned CT&G Automotive, Soroptimist DAF, and the Women’s Resource Centre.  Sandy donated the wash buckets and soap, as well has her time and expertise, Brooke helped out all day at the event, Shirley lent us the drying towels again this year.  Thank you thank you 🙂 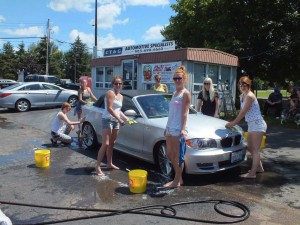 Are you smarter than a 5th grader??

Have fun testing your team’s knowledge (or lack there of). We will form teams of 6 or BYOT (Bring Your Own Team). Doors open at 6pm, Trivia from 7. There will be a light meal and cash bar, raffles, 50/50 and a feature draw for a $500 Entertainment Basket (winner need not attend).

Join us at the the Royal Canadian Legion 79 Hamilton Street North, Waterdown.Tickets are $25. 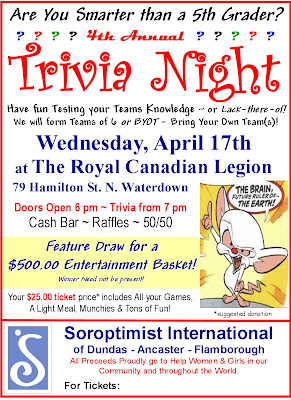 On behalf of the members of Soroptimist International of Dundas Ancaster Flamborough, we’d like to thank you for your generosity, your enthusiasm, your patience, and the delightful and joyful exuberance that the winner displayed when their number was called. Last night’s auction was a huge success!

As with all events, we are looking for feedback from our guests. What went well, where can we improve and what did you think of the new venue? We would like to hear from you: soroptimistdaf@gmail.com

We love shopping. You love shopping too. This holiday season, visit Connon Nurseries at 383 Dundas Street East, Waterdown for your holiday decor:

Mention Soroptimist, Dundas Ancaster Flamborough, at the checkout counter and Connon will donate 10% of your purchase towards helping support Women & Girls in our community. Click here for driving directions »

Thank you for your support!

Our Christmas Auction is back on the bill this year. Join us on Wednesday November 7, 2012 at the Ancaster Fair Grounds: Marritt Hall,  near the intersection of Hwy  52 and Wilson Street. The address is 630 Trinity Rd S, Ancaster. Tickets are $30. Dinner is at 6 p.m. and the auction is 7-9 p.m.

Door open at 5pm for a sneak preview. Door prizes. Cash bar. Only 300 advance tickets this year – no ticket sales at the door. Don’t forget, this year we are selling Santa’s Wine Raffle (5 tickets for $20). Over 100 auction items to be won.

Email soroptimistdaf@gmail.com for your tickets. 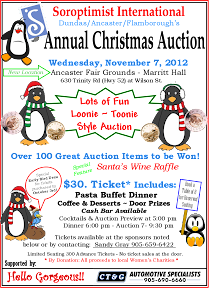 There is a Charity Car Wash this Saturday with proceeds to the Flamborough Women’s Resource Centre (FWRC) in Flamborough Centre. The organizer, Christine Aarlaht (partner at CT&G Automotive & newest member of SI DAF) is hosting this event, which is was re-scheduled from two weeks ago due to the rain.

Please bring your dirty cars: you know you don’t want to have to wash it yourself, so let us wash and dry it for you ……plus you are helping a great organization in our community. The FWRC is an outreach program of Interval House: please donate generously! 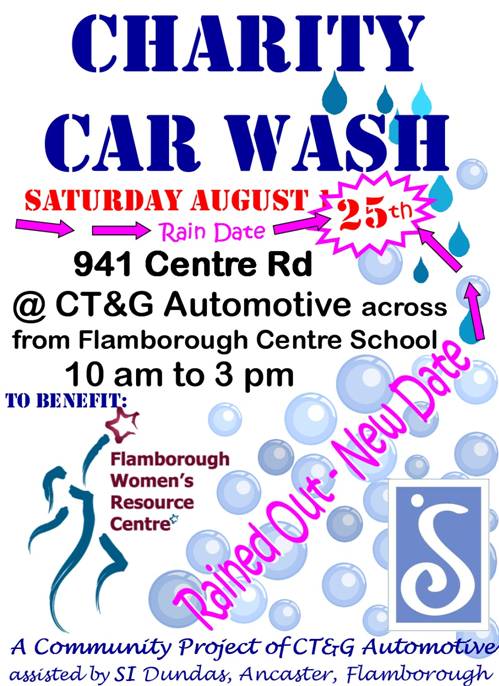 Our 3rd Annual Are You Smarter than a 5th Grader: Trivia Night took place at the Waterdown Legion on April 18th. This wonderful venue hosted over 120 persons who were all there with their “Mensa” hats on to show off their trivia knowledge! The 1st, 2nd and 3rd place teams went away with prizes and happy egos! The 50/50 draw was popular this year, and was won by Karen Dolyniuk, a SIDAF friend. The fundraising aspect of the night was a great success, as over $6,000 was raised to go toward local programs for women and girls. The major prizes were a “Basket of Booze” (won by a YWCA staff person) and a Gourmet Chef Dinner, An Evening with Chef Guerin Sykes (won by Denise Doyle of the YWCA). 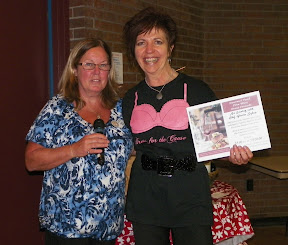 The funds raised for those prizes will be going directly to the YWCA Hamilton Encore Program, a post- breast cancer surgery exercise program. The YWCA Hamilton Encore program received seed funding from SIDAF and we continue to support it through events such as this. Thanks to everyone who attended, and our wonderful sponsors, for a fun and rewarding evening. 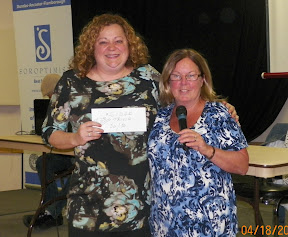 In the first photo, Ann Marie Collingwood is seen accepting the Gourmet Dinner prize from SIDAF President Shirley Eden on behalf of the winner Denise Doyle. In the second photo, Karen Dolyniuk is seen accepting her 50/50 prize from SIDAF president Shirley Eden. Thank you to Kim at Vitality Source Fitness for posting on FaceBook about how much the Encore participants enjoyed the event. 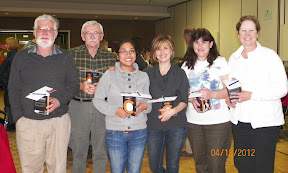 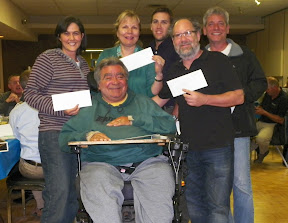 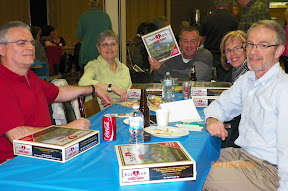 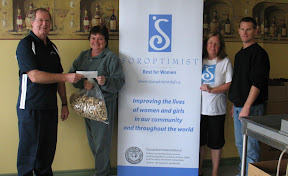 CORK FYI: Did you know that cork is a natural renewable resource that can easily be recycled? Did you know that synthetic corks put further demands on our oil resources but demand for natural cork maintains an environmentally friendly and renewable source of clean air, natural habitat for animals as well as supports family businesses spanning many generations.

Our 2011 Christmas Auction will be held this year on Wednesday November 16 in a new location: Copetown Lion’s Hall. Doors open at 5:30 to preview the auction item. Tickets are $30 and includes dinner. There are dozens of prizes to be won, each for only $1 or $2 per bid. Contact your Soroptimist friend for tickets, or contact Sandy Gray.

We hope you can join us, and even for those who can’t make it, we will be drawing for a filled Danby wine refrigerator with 18 bottles of red or white LCBO wine. Tickets are only $5 each, or five tickets for $20. 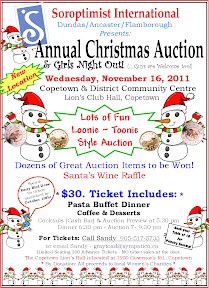 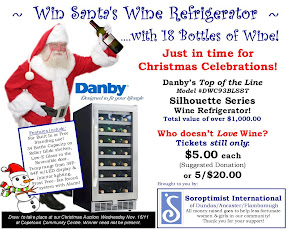 Our Soroptimist group has Hasty Note Cards for sale. The box sets are 6 cards, blank inside with envelopes. The images were generously donated by two photographers: Peter Self from Dundas and Gillian Sheldon of Burlington, and the project made possible by a grant from the Rotary Club of Waterdown. No prices are advertised on the box set itself.

We encourage you to get a few sets – they are great as stocking stuffers, hostess gifts, employee gifts, and “grand theft gift” or “secret santa” games, or to be enjoyed as cards to reconnect with a friend.

They are available for sale: $10 each or three sets for $25. Shipping is not included. Cheques can be made to SI-DAF – please send orders by email (soroptimistdaf@gmail.com) and include your contact information to arrange for pick up/delivery.