UN Women for Peace held their annual March in March on International Women’s Day. We marched from the gates of the UN to a platform. It was our pleasure to hear celebrities and dignitaries speak out against violence against women – all forms, zero tolerance. Kelly Rutherford was moved to tears but UN appointed Disney Actress and youth activist Monique Coleman spoke with pride about being a “Youth Champion” for the International Year of Youth in 2010 and the need to further address violence: sexual and physical. 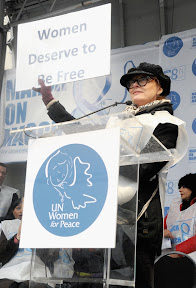 We were given hope for the insufferable plight of girls who wish to be educated when Susan Sarandon read a message from Malala Yousafzai. Even General Secretary, Ban Ki-moon attended to demonstrate his solidarity and support. What struck me most was  Lakshmi Puri’s call and response, which evoked such a strong emotion when she yelled out to the crowd:

Today and every day we say NO to discrimination and violence against women and girls.NO to domestic violence and abuse.

NO to rape and sexual violence.

NO to human trafficking and sexual slavery.

NO to female genital mutilation.

NO to child brides and child marriage.

NO to murders committed in the name of honour or passion.

And we say YES to peace, human rights, justice and equality.