Beautifully dressed attendees were greeted by an owl, cheeta and fruit bat as they entered the Mombasa Market Restaurant, located in a unique country setting, on the grounds of African Lion Safari. Upon receiving their seating designation by country, guests were directed to a photo with wild parrots squaking and greeting you with sayings like: “hello beautiful”.

Koho Catering provided an all you can eat buffet with trays of salads, cheese trays, rolls and vegetables down the centre aisle with two hot stations of chicken Cordon-blue Royale, roast beef, new potatoes, rice and roasted vegetables. There was a Shiraz from Obikwa in South Africa and a Wild Horse Canyon Chardonnay from BC on the table and dinner was followed up by plates of cake of all varieties.

Brooke was our club delegate for the evening and sat with the Ron and Eleanor Steepe of Kitching, Steepe & Ludwig Funeral Home and two of their former staff members, Margaret Robertson from Pause a While, and Norm Read, a C.A. with Beckett Lowden Read, and his wife Barbara. It was a delightful evening of pleasant conversation and carrot cake envy! 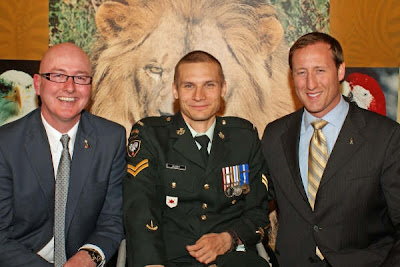 During the Mayor’s speech he included a focus on energy consumption and turned off the lights for 1 min to honour Earth Hour, which took place around the globe that Saturday starting at 8:30pm. GM and Coach, Don Robertson of the Dundas Real McCoys, also left their provincial championship game, which they won, and drove in from Pickering to join the festivities and honour the Life Time Achievement Award Winner, Bill Grisdale. 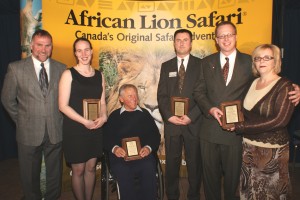 Our club was nominated for the Sandra Gray/Weeks Home Hardware Award for Service by an Individual Award. The winner went to Eric’s Amazing Race and Jessy’s Journey. In support of their nephew Eric Morden who suffers from Duchenne Muscular Dystrophy (DMD), Ted Lindsay (manager of the Flamborough Review) and his wife Heather organize a car rally to help fund research (see the Bottom Line page 5). The Community Service Award by a company went to Terra Greenhouses for their “grow for a cure” program.

It was such an honour to be nominated and recognized for the work we do in the community, and I know Sandy would have been mortified to hear the kind words regarding this award in her name.