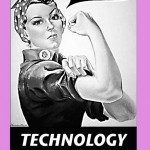 TECH2008 took place at the new Mohawk STARRT Centre at the former Stoney Creek Campus on Wednesday November 26. Over 200 young women attend the event each year and there was a lot of excitement amongst the organizers since this was the 9th year!

This annual event is a one day interactive career information conference for young women who are 15-30 years of age. The activities focused on where the occupational shortages are: the skilled trades and technology occupations.

Their icon, Rosie the Riveter, is from the United States, representing the six million women who entered the workforce for the first time during World War II, many of whom worked in the manufacturing plants. Rosie and her slogan “We Can Do It!” is now considered a feminist icon and a herald of women’s economic power to come. This was clearly evidenced by some of the attendees hoodies and purses that donned the character.

Our Soroptimist member, Brooke Gordon, volunteered as a team leader for the day. The agenda included Marissa McTasney, Founder and President of Moxie Trades, as the keynote speaker for the morning. This was followed by “speed networking” as team leaders had 6 minute intervals to interact with each table of girls to share their education and work history as well as answer questions (mostly about salary). Then with eye protection securely fashioned, the girls headed off on a tour of the wood working workshops (true workshops, not the meeting kind, with state of the art equipment) on their way to the exhibition hall. There were Canadian Forces Women, horticultural specialists, and chefs in training with smoothies, appetizers and pasta primavera being demonstrated with tastings. Amazingly, one of the welders apparently can make over $600/hour because of his underwater skills!

Some of the hands-on demonstrations included repairing bath-tub faucets, assembling a y-joint with plumbing materials, hammering nails (hilarious to watch) and using a dry-wall gun.

After a box-lunch, the afternoon was taken over by Union Gas for a junk-yard wars style competition to build an air-powered car! A fan was started up and first place was given to the furthest distance. Second place went to the best team spirit. The materials included:

The only requirement was that the nut had to be on the car and there was only 20 min to design and build it.

Brooke’s team came in second for distance (over 40′) and stayed straight the whole way. One of the girls, a grade 12 student from Hamilton, who claimed “I don’t know what I want to do” during the networking session, thought “making cars all day and testing to see how they work” would be the coolest job ever!

It was an excellent day!