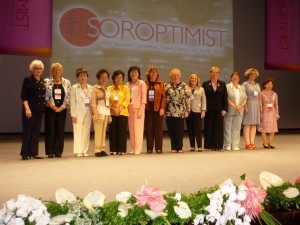 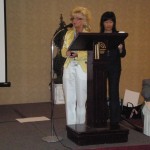 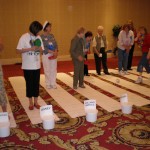 Shirley McCoy attended conference this year from 29 July to 2 August 2007 in Glasgow, Scotland and there were over 1,500 Soroptimists who attended. Six white doves flew over the attendees as they ‘Stood for Peace’ in a 30-minute vigil on the last day. 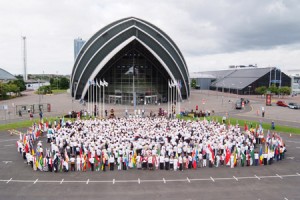 The 136 flags of member countries formed a ring of delegates in white shirts for Peace. Words and poems of peace were read by leading Soroptimists who then heard peace campaigner and author Satish Kumar say:

Towards the end of the vigil, President Lynn, Immediate Past President Joan and the Presidents of the four Federations each released a dove from a white casket as a symbol of peace. It was very emotional for all present!

The conference also showcased the new SI tartan that was specially designed for the occasion, but is officially recognized by the Scottish Tartans Authority. The wool colours incorporate ancient blue, dark mauve (purple), black, white and dark gold (orange). 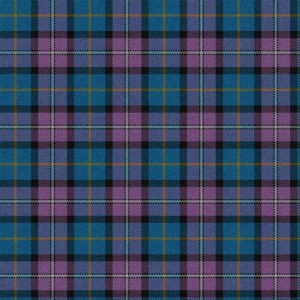