This morning started with a welcome from President Hanne. She noted that a women’s convention is filled with a colorful audience; a distinguishing factor from men in their dark suits. The keynote topic was: Women as Leaders in Civil Society and given by the right honourable Adrienne Clarkson, former Governor of Canada (1999-2005) and who founded the Institute for Canadian Citizenship. 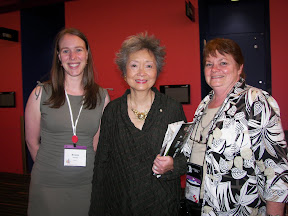 Mdm. Clarkson was adopted as an honorary member to the Kainai Chieftainship during a traditional ceremony held at Red Crow Park, near Standoff, Alberta. At the conclusion of the ceremony, the Governor General was adopted into the Blood Tribe with the name of Grandmother of Many Nations, making her the third woman to be inducted since the creation of the chieftainship. It is a title she is extremely proud of.

A society of difference (not similarities) is founded on the principle that love cannot be the binding factor or resolve disputes. A nation or state that is successful is often unlikeable or loathsome. It is principles of the heart, such as generosity and friendship, that are founded in love but not analysis or curiosity. She showcases this in Heart Matters, her recent book

Canada started with French Catholics followed by Anglo-Saxon Protestants and they founded Canada over the first Nations people who were native to the land. The nation began with union through diversity. Even now, the government targets 1% growth in population by immigration per year with the goal of citizenship within 3-5 years; there is 80% uptake. Yet Canada is not a headline in international papers – it is a hidden gem in the world.

The most powerful thing in a family home is the unrealized dreams of the parents – C. Yung. This concept is a powerful drive behind the desire to immigrate.

Room for us all: surprising stories of transformation is Her newest book – it highlights more on people’s story than simply where they come from.

Strength comes when outsiders finally become part of the mainstream. The ability to join without anyone standing in their way and becoming a full member of society is a hallmark of Canada. Helpful and kind people helped her family when they arrived from Hong Kong, particularly they taught her mother to cook as she previously had servants.

Some citizens became enemy-aliens in a country they were born in, but that changed within their lifetime (i.e. Raymond  Moriyama, a Japanese-Canadian was one of the architects who built the new Canadian Museum of War in Ottawa).

The Global Center of Plurality chose Canada to ask the fundamental question – how do we live with difference – and resides in former Museum of War. It was also redesigned by a Japanese-Canadian architect who was born in camps, Bruce Kuwabara.

Values in a civil society are what you make them in the public institutions, and in Canada one of them is education.

She took four questions: Comments on the maid in NY? People are welcoming of refugees but how do you retain their own but also adopt our traditions? Is the immigration experience necessary for creating new societies and making transformations? What role can young women play in Canada in leadership and immigration?

Then, answered all four questions together: Chinese men came to Canada without wives and often married native women out west; people stay in groups when they don’t feel welcome; teachers play an influential role to welcome the children and people want to be part of the mainstream or at least want their children to be; it should be a choice to attend language schools on Saturdays so the children can still speak to their grandparents but forcing them creates other issues; people keep what they choose to keep (she gave a great story of two sisters – the younger wore a traditional headscarf but when asked, it was not because of tradition, but because she wanted to be different); don’t judge others with your bias and preconceived notions; you know you are a friend with someone when you don’t want to change them; immigration introduces new patterns, ideas and ways of doing things. A wealthy white man in power admits to the sexual encounter – media attacks are targeting the maid’s character, not the implication of sexual harassment.

Mdm Clarkson considers herself part of a 2nd wave of feminism who now see equality becoming the norm, as evidenced by enrolment in professional education programs, but not at the senior or executive level in business because these women are balancing home/work; many don’t want just a career but family as well. She concluded with: remember if you choose to be Elizabeth I, there was only one.