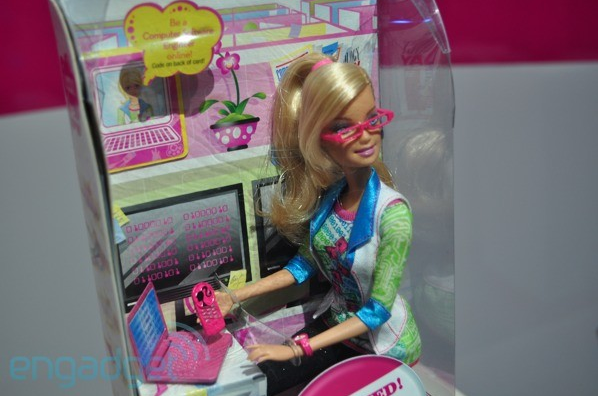 After about half a million votes poured in from all over the world, Mattel announced their newest career for Barbie on Friday. Voters had the opportunity to choose from an Architect, an Environmentalist, a Surgeon, a News Anchor, and a Computer Engineer. This was the first time during the course of Barbie’s 51 year history that fans were able to voice their opinion about her next career move and they were so surprised by the response that this year there will be two: News Anchor and Computer Engineer Barbie.

Barbie® I Can Be…™ dolls and accessories empower girls to play out different roles and “try on” fabulous careers, including computer engineer, the first Barbie® profession chosen by popular vote! This digital diva engineers the perfect geek-chic look, with hot pink accessories and sleek gadgets to match. The inspiring set also comes with a special code that unlocks career-themed content online, for even more digital play (how fitting)! – Mattel website

According to Lauren Dougherty, director of Barbie marketing for Mattel, voting for the Computer Engineer Barbie became viral amongst female engineers and other women in the tech industry. “All the girls who imagine their futures through Barbie will learn that engineers — like girls — are free to explore inﬁnite possibilities, limited only by their imagination,” says Nora Lin, President, Society of Women Engineers. “As a computer engineer, Barbie will show girls that women can turn their ideas into realities that have a direct and positive impact on people’s everyday lives in this exciting and rewarding career.” – ChipChicklets

Computer engineer Barbie will be released in winter 2010, wearing a geeky binary code patterned t-shirt; she comes equipped with everything a modern day tech girl would need: a smartphone, Bluetooth headset, laptop travel bag, and a pink laptop with a dual monitor set up!